Angle Recession (AR) of the anterior chamber angle occurs secondary to concussive ocular trauma. AR is associated with glaucoma in a minority of patients (only low single digit percent of patients with AR actually go on to develop glaucoma) and the development of glaucoma may occur shortly after the trauma or many decades later. Wolff and Zimmer first described (1962) the association of glaucoma with AR and our understanding of the progression from angle trauma to glaucoma in some patients but not others remains poorly understood. It is believed that over half of eye that experience blunt/concussive force will develop some degree of angle recession and that presence of a traumatic hyphema will increase the likelihood of co-existent AR. Increased angle pigmentation and lens trauma may also be linked with higher likelihood to develop glaucoma. AR greater than 180 degrees has been shown to increase the likelihood of developing glaucoma in both the short term and long-term follow-up period. A common teaching is the fact that, in those with AR glaucoma in one eye, glaucoma develops in the contralateral eye (devoid of AR or history of trauma) half of the time. This led to the belief that AR Glaucoma develops in eye predisposed to developing glaucoma already and may also explain the low incidence of glaucoma in AR eyes. 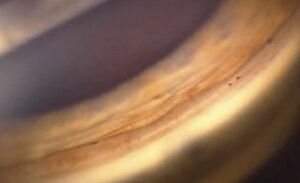 Gonioscopy is required to evaluate and quantify the presence and degree of angle recession post trauma. For this reason, all patients with history of ocular trauma should undergo detailed gonioscopy on presentation or soon after conditions allow (for example, once a hyphema has resolved). If the contralateral eye is free of trauma, the anatomy of both eyes can be compared to identify subtle differences and enhance diagnostic capabilities. Angle findings include widening of the ciliary body band resulting from a tear between the longitudinal and circular muscles of the ciliary body (Figure 1). Ciliary and iris vessels may also be damaged resulting in traumatic hyphema and explains the high associated between AR and hyphema (co-localized tissues that experience high force with damage). Iris processes may be torn or absent and the scleral spur may appear more distinctly white compared to the opposite eye and has been described as “glistening”. The adjacent trabecular meshwork may also be damaged, with or without synechiae, increased/localized pigmentation and membrane formation, and subsequent elevated IOP in more likely with higher degrees of damage. Other findings that indicate trauma should also be detailed on slit lamp exam such as damage to the iris, cornea, lens and retina. A peaked pupil may indicate eye wall damage that is subtle and hypotony may indicate ciliary body shut down due to inflammation or retinal detachment that requires immediate attention. Baseline examination of the optic nerve and retina should also be completed including visual field testing and optic nerve head optical coherence tomography which can then be compared to future testing as surveillance continues for development of glaucoma.

The differential diagnosis of AR glaucoma centers on appropriate history and identification of a history of blunt trauma. Unfortunately, many patients do not recall past trauma and examination is often needed to exclude other disease entities that can also present with unilateral elevation of intraocular pressure such as pseudoexfoliation, pigmentary glaucoma, ICE syndrome, post-surgical trauma and other rare entities such as carotid-cavernous fistulas. Many of these entities can be identified with careful slit lamp examination.

AR Glaucoma is treated with topical IOP lowering medications and all classes of medication may be used except miotics (pilocarpine) which may exacerbate AR in the early stages post trauma. If IOP spikes early post trauma and there is coexistent inflammation, steroids may be used to decrease cell and flair and atropine may be used to enhance comfort. Care should be taken to taper steroids as soon as possible to avoid steroid induced spikes in IOP. Laser trabeculoplasty is believed to be less effective but is also low risk if attempted. Minimally invasive angle procedures (i.e. stents and goniotomy) have not been well studied in AR glaucoma. Filtration surgery may be performed when IOP lowering drops and laser are not effective. Invasive surgery may be less successful if done shortly after acute trauma due to increased inflammation and higher tendency for hyphema. Trabeculectomy and glaucoma drainage devices are, however, highly effective in later stages of AR glaucoma and represent our primary method of lowering IOP in these cases. Endocyclophotocoagulation (if pseudophakic or if combined with phacoemulsification) and trans-scleral cyclophotocoagulation may both be used with effective outcomes.

Retrieved from "https://www.keogt.com/w/index.php?title=Angle_Recession_Glaucoma&oldid=1475"
Category:
This page was last edited on 10 November 2020, at 11:42.
All text, tables, images and figures or any other content submitted to KEOGT become the exclusive property of KEOGT. The authors/submitter attests that they have all rights to submit the content and that the content is free for use by KEOGT without encumbrances (licensing fees, copyrights or trademarks) by other parties. By submitting content you hereby irrevocably assign and agree to assign to KEOGT, free and clear of any restrictions or encumbrances, all of your rights, title and interest in and to the content submitted.
Privacy policy
About Kahook's Essentials Of Glaucoma Therapy
Disclaimers