Cataracts and glaucoma are common ophthalmic maladies whose incidence increases with age. Therefore, visually significant cataracts often present as a concomitant issue with glaucoma in older patients. This combined presentation can also occur secondary to the effects of glaucoma medications or other ocular diseases.[1][2][3]

Combined surgery may be indicated in the following scenarios: 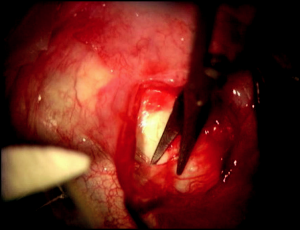 Cataract surgery at the time of trabeculectomy has been the most commonly performed glaucoma–cataract combination procedure. The most recent studies have shown that although intraocular pressure (IOP) reduction in a combined surgery may be either equal to or less than with trabeculectomy alone,[4][5] this advantage may be lost with a sequential surgery to remove the cataract at a later date. In addition, there has been a great deal of discussion over whether 1-incision site combination surgery or 2-incision site combination surgery is preferred. The most recent meta-analysis of this discussion indicates that there is no significant difference in IOP reduction, number of glaucoma medications used, or visual acuity between these 2 choices.[6] Ultimately, the best choice may come down to the surgeon’s preference based on comfort and experience.

Our preference is for a 2-site combination phacoemulsification with trabeculectomy. A 6-0 Vicryl suture is passed through the superior cornea to be used as a traction suture throughout the entire case. Attention is then turned to the creation of the conjunctival flap superiorly. This can be completed with either a fornix- or limbal-based flap. In our technique, Westcott scissors are carefully used to create a fornix-based peritomy through the conjunctiva and Tenon’s capsule, which is carefully dissected forward to the scleral bed at the corneal limbus (Figure 17-1) . After light cauterization of the scleral bed, a 15-degree blade is then used to create a triangular scleral flap dissected forward to the clear cornea. The shape of the scleral flap may vary depending on surgeon preference, but it is important that it is dissected completely to clear cornea. Mitomycin C (MMC)-soaked Weck-Cel sponges are then applied underneath Tenon’s capsule and around the scleral flap for approximately 3 minutes (Figure 17-2). The concentration of MMC applied is titrated depending on the appearance of the conjunctiva and Tenon’s capsule in each individual case. Our most common dosage of MMC is 0.3 mg/mL with a 3-minute duration of exposure. After removal of the MMC sponges, balanced salt solution is used to vigorously irrigate the ocular surface as well as underneath all edges of the conjunctival-Tenon’s flap. 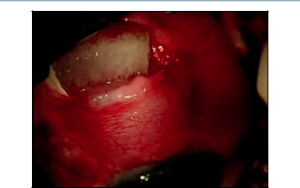 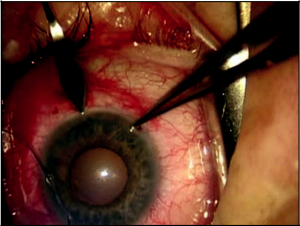 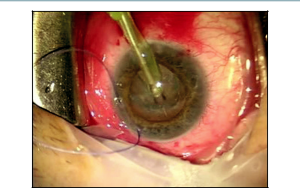 At this point, the surgeon repositions temporally for the beginning of the phacoemulsification. A clear corneal wound is used for the phacoemulsification and placement of the intraocular lens (IOL) as with standard phacoemulsification surgery (Figures 17-3 and 17-4). At the end of the cataract portion of the surgery, a 10-0 Vicryl suture is placed through the small corneal wound for chamber stability. The advantage to postponing the cataract portion of the surgery until the completion of the early steps of the trabeculectomy is less of a concern for ocular chamber stability during these steps. If the cataract had been completed prior to all steps of the trabeculectomy, this would have allowed for more opportunity for shallowing of the chamber and other intraocular complications. This approach also decreases the chance of MMC exposure inside the eye, as an opening into the anterior chamber is not present until after MMC has been removed from the ocular surface. In addition, the smaller corneal wound is typically less visually significant for the patient astigmatically than would a full scleral cataract wound.

The surgeon next returns to a superior position for the completion of the trabeculectomy portion of the surgery. The scleral flap is carefully lifted and a blade or needle is used to make a small sclerostomy, which is typically enlarged with a Kelly punch (Figure 17-5). The size of the ostomy controls the amount of flow out of the eye. If there is a larger ostomy with less overlap from the scleral flap, more flow is typical. The reverse is true with more overlap from the scleral flap. Next, Vannas scissors are used to create a small iridectomy to reduce the risk of iris closure of the ostomy created. Although there have been some advocates of not using an iridectomy due to the risks of hyphema, any bleeding is typically manageable with light cautery. Three to 5 interrupted 10- 0 nylon sutures are then used to close the scleral flap over the sclerostomy to prevent early hypotony in the eye. These sutures can be released with argon laser over the following weeks after surgery to titrate the IOP to the desired level. 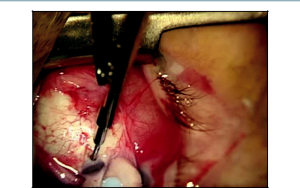 Figure 17-5. Creating a sclerostomy with a Kelly punch.

In this technique, an 8-0 Vicryl suture is then used to complete a double-layered running closure of the Tenon’s capsule and conjunctiva. It is important to assure that this wound is watertight at the end of the surgery with an appropriately formed anterior chamber and IOP.

The Ex-Press (Alcon Laboratories Inc) mini glaucoma shunt is a biocompatible, nonvalved stainless steel device with a small internal lumen that has recently gained favor as an alternative to traditional trabeculectomy with or without cataract surgery. Whether the shunt is used in combination with cataract surgery or alone, it has been found to significantly reduce IOP with high surgical success rates.[7] 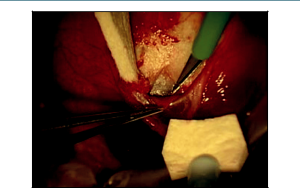 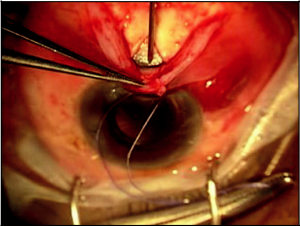 Figure 17-7. Entering the anterior chamber with a 25-gauge needle.

The Ex-Press mini shunt is indicated in similar settings as described for traditional trabeculectomy. The initiation of the surgery is identical with creation of conjunctival and scleral flaps as well as use of antifibrotics as described above (Figure 17- 6). After completion of the phacoemulsification portion of the combined procedure, the scleral flap is lifted and the trabecular meshwork is identified. Next, a 25-gauge needle, aligned parallel to the iris plane, is inserted just posterior to the trabecular meshwork into the anterior chamber (Figure 17-7). Being aware of location and control with the needle are important factors at this point. Too much movement may make a larger opening than required for the implant and lead to excessive aqueous leak around the implant. A poor angle of insertion may also place the implant too posterior with the tip buried in the iris or too anterior with the tip causing damage to the endothelial surface of the cornea.

Next, the implant is inserted through the opening created just posterior to the trabecular meshwork. It is important to insert the implant at the same angle of approach that was used with the 25-gauge needle in the previous step. The shunt is injected using a preloaded inserter, which releases the shunt with depression of the inserter button. Prior to inserting the shunt, the surgeon should familiarize himself or herself with the release mechanism on the preloaded inserter to allow for smooth and uncomplicated insertion. Care is taken to make sure that the plate of the implant is flush with the scleral bed and the opening of the lumen is directed posteriorly towards the apex of the scleral flap. Closure of the scleral and conjunctival flaps progresses as indicated for a standard trabeculectomy. An advantage of the Ex-Press implant as compared with traditional trabeculectomy is that there is less intraocular manipulation of tissue required after creating the scleral flap. No creation of an iridectomy is required. In addition, there tends to be less hypotony postoperatively with the glaucoma Ex-Press shunt compared with standard trabeculectomy[8] and it appears to be a successful alternative for combined surgery.

In eyes that may not be indicated for or have failed trabeculectomy, glaucoma drainage devices have been successfully used to lower IOP. In some of these patients, visually significant cataracts are also present and in need of removal. Although it has not been our practice to do so, some have advocated a combined phacoemulsification and glaucoma drainage device procedure.

This combined procedure typically begins with creation of a fornix-based flap in the superotemporal or inferonasal quadrants[9] for placement of the glaucoma drainage device of choice (Baerveldt, Ahmed, Molteno, etc.). The plate of the glaucoma drainage device is then secured to the scleral bed 9 to 10 mm behind the limbus using 2 interrupted sutures. If a Baerveldt implant is used, the shunt is then ligated with an additional suture around the tube, and fenestrations are made in the tube using the suture needle.

At this stage of the procedure, attention is turned to a clear corneal phacoemulsification. After completing the cataract portion of the procedure, an interrupted 10-0 Vicryl suture is placed through the cataract wound. The tube is then trimmed to an appropriate length and inserted into the anterior chamber through an opening created with a 23 -gauge needle (Figure 17-8). An interrupted suture is then used to secure the tube and prevent any inappropriate bending underneath the conjunctiva. A patch graft of donor sclera, cornea, or pericardium is then sutured into place over the exposed tube. The conjunctival flap is then sutured closed with the suture of the surgeon’s choice. 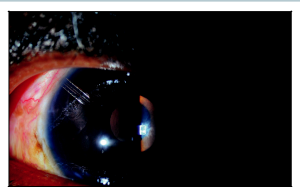 It is important with the placement of any glaucoma drainage device that careful attention is paid to the anterior chamber depth before surgical incision. This will allow for understanding of whether the tube will be well-positioned in the anterior chamber without being covered by the iris or causing damage to the corneal endothelium. This may be one of the more difficult determinations to be made when combining this surgery with a cataract

extraction, as the standard anterior chamber depth typically changes­ after cataract surgery. Although the few studies addressing combined glaucoma drainage device and cataract surgery have indicated promising IOP reduction and safety profiles, some incidence of corneal decompensation has been indicated as well.[10] Other complications may include choroidal effusion, retraction of the tube, recurrent iritis, cystoid macular edema, corneal edema, fibrin plugging of the tube, and macular striae.

Glaucoma and cataracts coexist in the elderly patient population and will continue to present challenges to the ophthalmic surgeon when combination surgery is undertaken. A combined approach to both pathologies may be worthwhile, and perfecting these techniques both individually and combined will lead to improved patient outcomes. Newer approaches with minimally invasive glaucoma surgery, such as the iStent or suprachoroidal devices, are covered elsewhere in this book and may lessen the complications associated with combined surgical procedures. Ultimately, the decision for combined surgery must be undertaken with the individual patient in mind as well as a full understanding of the surgeon’s experience and comfort level in combination approaches to both cataract and glaucoma.

Retrieved from "https://www.keogt.com/w/index.php?title=Glaucoma_Filtration_Surgery_Combined_With_Cataract_Extraction&oldid=1005"
Category:
This page was last edited on 16 October 2019, at 20:17.
All text, tables, images and figures or any other content submitted to KEOGT become the exclusive property of KEOGT. The authors/submitter attests that they have all rights to submit the content and that the content is free for use by KEOGT without encumbrances (licensing fees, copyrights or trademarks) by other parties. By submitting content you hereby irrevocably assign and agree to assign to KEOGT, free and clear of any restrictions or encumbrances, all of your rights, title and interest in and to the content submitted.
Privacy policy
About Kahook's Essentials Of Glaucoma Therapy
Disclaimers