Traditionally, glaucoma has been managed medically until disease progression necessitates incisional glaucoma procedures. The trabeculectomy, considered by many to be the gold standard incisional glaucoma procedure, although repeatedly shown to be effective at lowering intraocular pressure (IOP), carries lifelong risks often associated with the necessary conjunctival bleb created during the procedure. These bleb-related risks include bleb leak, bleb encapsulation, bleb dysesthesia, blebitis, and bleb-associated endophthalmitis.[1][2][3][4] Other potential complications intra- and postopera-tively include hypotony, hyphema, and choroidal detachment.

Such complications have encouraged many glaucoma specialists to seek out a less invasive IOP-lowering surgery. Recently, circumferential viscodilation and tensioning of Schlemm’s canal using a flexible micro-catheter (canaloplasty) has gained popularity in the treatment of open-angle glaucoma in adults. Lewis et al[5] have shown a significant lowering of IOP and medication usage via canaloplasty at 2 years with results similar to trabeculectomy.[6] At 24 months, canaloplasty lowers IOP from 23.3 ± 4.0 mm Hg to 16.3 ± 3.7 mm Hg and decreases the average number of medications from 2.0 ± 0.8 to 0.6 ± 0.8. Combining clear corneal cataract extraction via phacoemulsification with canaloplasty results in an even greater decrease in IOP. Phacocanaloplasty decreases IOP from 23.1 ± 5.5 mm Hg to 13.4 ± 4.0 mm Hg at 24 months and average number of medications drops from 1.7 ± 1.0 to 0.2 ± 0.4.

Clear corneal cataract extraction via phacoemulsification is performed using traditional methods. A side-port paracentesis is performed followed by introduction of ophthalmic viscosurgical device (OVD) into the anterior chamber. Planning paracentesis placement is important when glaucoma surgery is expected to follow. The surgeon must place the side-port incision in a position such that it will not intersect the anticipated corneal traction suture needed during canaloplasty. If working on a right eye, a right-handed surgeon may place his or her side-port incision at approximately 10 o’clock and skew the clear corneal incision inferotemporally. Clear corneal incisions may vary in size and architecture. A continuous curvilinear capsulorrhexis follows with subsequent hydrodissection and hydrodelineation. Removing the nucleus may be achieved via divide-and-conquer, phaco-chop tech-niques, or whatever the anterior chamber surgeon favors keeping in mind certain risk factors present in glaucoma patients such as zonular weakness in psuedoexfoliates (Figure 18-1). Epinuclear material may be removed with the phacoemulsification handpiece, and the irrigation and aspiration hand piece is then used to remove remaining cortical material. After insertion of the IOL within the capsule and removal of the remaining OVD, it is important to suture the clear corneal incision wound closed with 10-0 Vicryl (Figure 18-2). Placing a suture through the clear corneal incision promotes anterior chamber stability, which is crucial during canaloplasty and other glaucoma procedures. Be sure all remaining OVDs are removed prior to suturing the wound, as remaining OVD, may cause unsafe IOP elevation postoperatively.

Canaloplasty involves conjunctival exposure to enable a superficial, then deep, scleral flap creation followed by meticulous unroofing of Sch-lemm’s canal, which is then catheterized. A microcatheter tipped with an illuminating optical fiber and an ophthalmic viscosurgical device delivery system is then used to cannulate and viscodilate Schlemm’s canal 360 degrees. Finally this same catheter is used to introduce polypropylene suture into Schlemm’s canal for tension application and canal distension.

Typically, anesthesia and akinesia is achieved with a retrobulbar block. A corneal traction suture is placed superiorly next to the limbus. Next, a fornix-based conjunctival incision is created followed by careful dissection of conjunctiva and Tenon’s capsule down to bare sclera. The authors favor a superonasal approach during this step, as it leaves the superior and superotemporal conjunctiva undisturbed should future incisional surgeries be necessary. Hemostasis is achieved with wet-field cautery. No antifibrotics, such as mitomycin C (MMC), are necessary. 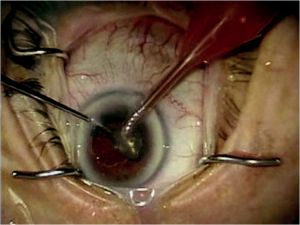 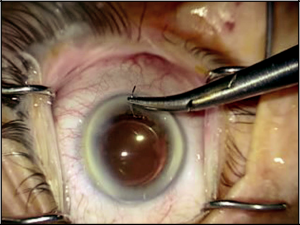 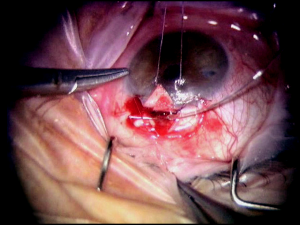 Identifying the cross striations of the scleral spur also anatomically orients the surgeon to the location of Schlemm’s canal, which is immediately anterior. 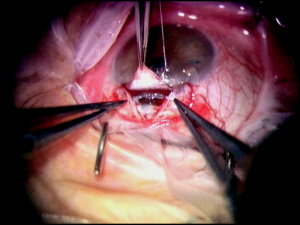 At this point, the IOP should be lowered to the mid- to high-single digits by burping the pre-fashioned paracentesis wound. This serves to decompress the eye and decrease the risk of perforating into the anterior chamber while isolating Schlemm’s canal and creating Descemet’s window. After the canal is identified, the deep flap is carefully further dissected anteriorly to detach Schwalbe’s line and to create an appropriately sized Descemet’s window, which should be a minimum of 500 µm. Aqueous usually, but not always, percolates through the Descemet’s window. The iTrack microcatheter (iTrack-250, iScience Interventional, Menlo Park, California) is then inserted through 1 of the canal ostiae. The lights are dimmed to allow visualization of the lighted tip of the microcatheter as it is advanced through Schlemm’s canal. If an obstruction is encountered during cannulation, the microcatheter may be retracted, inserted into the opposite ostium, and cannulated the other direction to achieve successful passage. After circumferential cannulation is completed, a 10-0 polypropylene (Prolene) suture is tied to the distal end of the catheter, which is retracted, introducing the suture into Schlemm’s canal (Figure 18-3). As the suture is pulled through, OVD is injected at a rate of 0.5 mL/2 hours (1/8th turn of the OVD injector every 2 clock hours). The suture is tied, allowing appropriate tension to be placed on the canal without inadvertently performing a trabeculotomy (Figure 18-4). Suture tensioning is critically important, as this allows for transmission of tension 360 degrees on Schlemm’s canal and the trabecular meshwork, thereby restoring natural aqueous outflow.

Excision of the deep scleral flap is followed by watertight closure of the superficial scleral flap with interrupted 10-0 nylon sutures. The conjunctiva and Tenon’s capsule is reapproximated with 8-0 Vicryl at the limbus, and subconjunctival antibiotics are given along with topical antibiotic-steroid ointment.

Canaloplasty has become an appealing alternative to traditional incisional glaucoma therapies. It is less invasive, blebless, no mitomycin C is necessary, and it rejuvenates the natural drainage system. Although canalo-plasty is effective in lowering IOP and medication dependence, it still has limitations. Canaloplasty may be contraindicated in patients with chronic angle closure, narrow angles, angle recession, neovascular glaucoma, and in eyes that have undergone previous glaucoma procedures that preclude adequate cannulation of Schlemm’s canal.[11] If pressure lowering below mid-to low-teens is desired, then a trabeculectomy with antifibrotics or glaucoma drainage implant may be more optimal than canaloplasty, which may not be the best option in patients with advanced glaucoma in need of very low IOP. A learning curve is necessary for successful catheterization of Schlemm’s canal, and certain anatomical variations may prohibit successful catheter-ization such as the microcatheter tip entering a large collector channel or meeting unknown resistance.[12] Canaloplasty is designed to be a blebless procedure; however, laser goniopuncture was necessary in 4.7% and blebs occurred in only 3.8% of patients at 24 months in the study by Lewis et al.[5] More common complications listed in this study were microhyphema (less than 1.0 mm layered blood; 7.9%), early-elevated IOP (0 to 3 months postop-erative; 7.9%), and hyphema (≥1.0 mm layered blood; 6.3%). All hyphemas and microhyphemas resolved by 1 month, which was consistent with other studies.[5][13] Early IOP elevation was also transient and resolved spontaneously by the next office visit. Other less common complications include late IOP elevation (more than 3 months postoperative; 2.4%), wound hemorrhage (2.4%), Descemet’s membrane detachment (1.6%), gross hyphema (1.6%), suture extrusion through trabecular meshwork (1.6%), and hypotony (0.8%).[5][12][13] Probably the most significant advances canaloplasty offers are the lack of choroidal detachments, blebitis, or bleb-related endophthalmitis observed in any eyes treated with canaloplasty or phacocanaloplasty.[5][12][13]

Retrieved from "https://www.keogt.com/w/index.php?title=Canaloplasty_Combined_With_Cataract_Extraction&oldid=1006"
Category:
This page was last edited on 16 October 2019, at 20:18.
All text, tables, images and figures or any other content submitted to KEOGT become the exclusive property of KEOGT. The authors/submitter attests that they have all rights to submit the content and that the content is free for use by KEOGT without encumbrances (licensing fees, copyrights or trademarks) by other parties. By submitting content you hereby irrevocably assign and agree to assign to KEOGT, free and clear of any restrictions or encumbrances, all of your rights, title and interest in and to the content submitted.
Privacy policy
About Kahook's Essentials Of Glaucoma Therapy
Disclaimers