Traditionally, patients with cataract and progressive glaucoma would be candidates for combined cataract surgery plus trabeculectomy or insertion of a glaucoma drainage device (GDD). Although often successful, these combined surgeries carry significant comorbidities and delayed visual recovery. 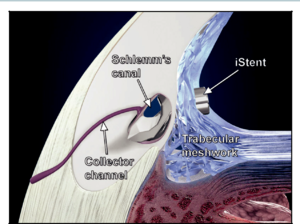 Typically, surgeons do not need to alter their standard cataract approach when coupled with the iStent. However, there are a few important points that should be considered. First, it is important that the capsular bag remain intact during the surgery and that there is no vitreous present in the anterior chamber. Because the lumen of the device is 0.08mm, in the case of the iStent inject, it may be prone to obstruction by vitreous and other debris. If vitreous is encountered during planned cataract extraction plus an iStent, the surgeon should consider delaying the stent portion of the surgery. The surgeon can then return a couple of months later to place the iStent under more stable considerations and avoid vitreous obstructing the stent, although reimbursement in some markets is tied to combination with cataract extraction. Additionally, it is important to maintain a stable anterior chamber in the early postoperative period. For this reason, there should be no wound leak at the time of surgery. If stromal hydration is insufficient to create a watertight seal, the surgeon should consider placing a 10-0 nylon suture through the incision to ensure a stable anterior chamber. This would prevent anterior chamber collapse in which the iris could obstruct the lumen of the device. Furthermore, all remaining viscoelastics should be completely evacuated at the end of the surgery to ensure stent patency.

Many types of intraocular lenses (IOLs) can be placed in conjunction with an iStent. Standard monofocal, toric, multifocal, or accommodating IOLs are all acceptable in combination with the iStent. Single-piece or 3-piece lenses are also acceptable. It is important that the patient have adequate capsulorrhexis coverage of the anterior optic to prevent prolapse or dislocation of the lens anteriorly. When considering a multifocal IOL in a glaucoma patient, the surgeon could consider contrast sensitivity testing in patients considering a multifocal IOL because both the lens and the glaucoma can cause decreased contrast sensitivity and lead to a patient who is unsatisfied with the postoperative visual results. 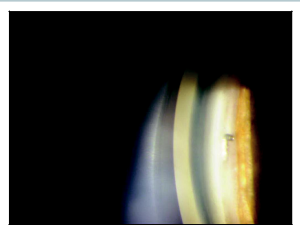 Figure 2: Photograph of the Glaukos iStent in the trabecular meshwork. (Reprinted with permission of Thomas W. Samuelson, MD.)

A surgeon can perform her routine cataract surgery through either a clear corneal incision or a scleral tunnel. After the standard cataract surgery is performed and the IOL is placed, the viscoelastic is left in the eye. The patient’s head is tilted away from the temporally positioned surgeon by approximately 45 degrees, and the operating microscope is tilted approximately 45 degrees toward the surgeon to allow for the best visualization of the trabecular mesh work through the gonioprism. Viscoelastic is placed on the bottom of the gonioprism to act as a coupling agent between the gonioprism and the cornea. The gonioprism is then placed on the nasal aspect of the cornea and used to directly visualize the trabecular meshwork. It is helpful if the IOP is not too high (less than 15 mm Hg) when initially visualizing the trabecular meshwork because back flow of blood can be seen in Schlemm’s canal as an important landmark to identify the posterior trabecular meshwork. If blood is not seen in Schlemm’s canal, then identification of the typical gonioscopic landmarks, such as the scleral spur, Schwalbe’s line, or pigment in the posterior trabecular meshwork can assist the surgeon in determining the proper stent placement (Figure 2). It is beneficial to further inflate the anterior chamber to a pressure of 20-25mmHg prior to inserting the iStent so that corneal folds, more common with lower eye pressures, are minimized. The surgeon holds the gonioprism in the non-dominant hand and uses the insertion device in the dominant hand through the cataract incision to place the iStent device into the trabecular meshwork. Injector systems help facilitate this for the surgeon. As the trabecular meshwork is engaged, the surgeon should be conscientious of not burying the device all the way into the canal, in the case of the iStent Inject, thereby limiting its effectiveness. The first generation iStent requires a side to side motion for implantation with two different models that consist of left and right handed geometries. The iStent Inject model is injected over a trocar that indents the trabecular meshwork against the anterior wall of the canal and may misfire or fall from the targeted tissues. Reloading and repositioning can be accomplished in these events but may require repeated attempts. Oftentimes, after the device is implanted, a blood is noticed coming out from the stent, which indicates that it is properly positioned through the trabecular meshwork. Multiple devices can be placed to help decrease the IOP even further but with added cost that are not reimbursed by insurance or medicare (in the United States). Insurance coverage, or governmental coverage in general, may vary in international markets and should be explored prior to initiating the use of these devices.

The viscoelastic is then removed from behind the lens and the anterior chamber, ensuring that no remaining viscoelastic could obstruct the lumen of the stent. The wounds are hydrated to ensure that they are watertight. If a watertight seal is not obtained, a suture should be placed.

The postoperative recovery is typically very similar to standard cataract surgery. Occasionally, a hyphema may be present as blood can regurgitate during the early post-operative period. This blood typically reabsorbs quickly. Most patients only require the standard regimen of cataract drops includes antibiotics, steroids, and possibly nonsteroidal anti-inflammatory drugs. Depending on the patient’s preoperative IOP, glaucoma medications may be stopped immediately to determine the new baseline IOP.

It is important to note that unlike a trabeculectomy or glaucoma drainage device, the remaining trabecular meshwork continues to provide significant outflow for the patient, and starting steroids may decrease this outflow, leading to a steroid-induced elevation of IOP. The steroid response post TM bypass stent placement may also be due to changes in the distal outflow system that are currently poorly understood. 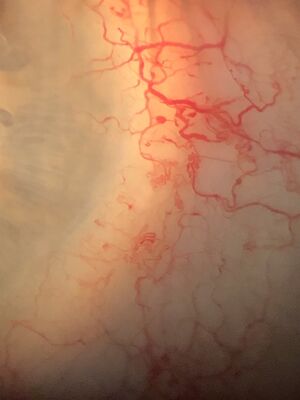 The iStent, both the original and the iStent Inject models, are a viable alternative for lowering IOP further compared to standalone cataract surgery. Although the iStent does not lower IOP as much as trabeculectomy or other glaucoma drainage devices, the less invasive approach and the lower morbidity make it an appealing option for early intervention in mild to moderate glaucoma. The ultimate goal is to target early intervention with the hope of decreasing the need for more invasive glaucoma surgery in the future.

Retrieved from "https://www.keogt.com/w/index.php?title=Cataract_Extraction_Plus_iStent&oldid=1454"
Category:
This page was last edited on 12 October 2020, at 20:30.
All text, tables, images and figures or any other content submitted to KEOGT become the exclusive property of KEOGT. The authors/submitter attests that they have all rights to submit the content and that the content is free for use by KEOGT without encumbrances (licensing fees, copyrights or trademarks) by other parties. By submitting content you hereby irrevocably assign and agree to assign to KEOGT, free and clear of any restrictions or encumbrances, all of your rights, title and interest in and to the content submitted.
Privacy policy
About Kahook's Essentials Of Glaucoma Therapy
Disclaimers