Glaucoma Surgery in the Nanophthalmic Eye

The surgical management of glaucoma in eyes with nanophthalmos requires special consideration because these eyes are prone to serious post-operative complications, including significant inflammation, uveal effusion syndrome, retinal detachment, cystoid maculopathy, aqueous misdirection, and severe vision loss.[1] Fortunately, surgical outcomes have improved due to better recognition of the full clinical spectrum of the “small eye”[2] and advances in cataract surgery, as well as glaucoma surgeries.

Nanophthalmos is characterized by a small eye without other malformations. Clinical features include a narrow palpebral fissure, a small orbit, a short axial length, axial hyperopia, a small to normal corneal diameter, a shallow anterior chamber, thickened choroid, thickened sclera, and a high lens-eye volume ratio.[2] The angle-closure form of glaucoma occurs frequently in such eyes. The “pushing” pupillary block mechanism is caused by a relatively large lens in a small anterior segment, which leads to narrowing of the angle and peripheral anterior synechiae (PAS) formation. Another, less common mechanism occurs in the presence of an annular ciliochoroidal effusion in which the anteriorly rotated ciliary processes displace the peripheral iris to close the anterior chamber angle.[3]

Diagnostic evaluation should include refraction, gonioscopy, and biometry measurements of the axial length, keratometry readings, and anterior chamber (AC) depth. Imaging with standard B-scan ultrasound provides helpful information about the combined retinal-choroidal-scleral thickness.[2] Although there are no absolute biometric parameters for nanophthalmos, an axial length <21.0 mm and scleral thickness >1.7 mm support the diagnosis of nanophthalmos.[2] A variety of retinal pathology has been described in these eyes, such as macular hypoplasia, retinal cysts, macular folds, retinoschisis, pigmentary retinopathy, and disc drusen.[2] 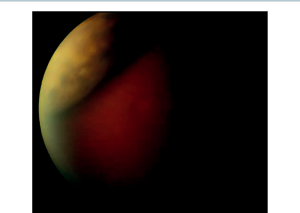 Traditionally, the first-line treatment of glaucoma in nanophthalmic eyes has been medical and laser therapy due to the high rate of complications with incisional surgery. Typically, aqueous suppressants such as beta-blockers, alpha-adrenergic agonists, and carbonic anhydrase inhibitors are used. In addition, the prostaglandin outflow agents can also be used to lower intraocular pressure (IOP). Miotic agents should be used with caution, as they may worsen pupillary block by relaxing the zonules, which allows the lens to “push” forward and further crowd the anterior segment.[3][4]

Laser iridotomy can relieve the pupillary block, and iridoplasty can further open the drainage angle.[1][4] These interventions should be per-formed before extensive PAS develops.[4] It is important to remember that nanophthalmic eyes are more prone to significant postoperative inflammation, therefore steroids should be used judiciously. Such patients may develop uveal effusions after laser procedures (Figure 33-1), which may require oral prednisone in addition to topical prednisolone. If such effusions do not respond to aggressive steroid use, unsutured sclerotomies may be required to allow for posterior drainage of the effusions.[4]

The decision for incisional surgery in an eye with nanophthalmos requires careful planning of anesthesia and surgical approach. In such eyes, it is advised to keep a simple approach given the increased risk of complications. As there are no clinical trial results to guide treatments in such eyes, the following considerations are based on clinical experience.

If a patient has shown increased propensity for inflammation, such as spontaneous uveal effusions or marked inflammatory reaction after laser treatments, then preoperative prednisone should be considered 2 to 3 days before surgery at a dose of 40 to 60 mg. To minimize the risk of increased posterior pressure and intraoperative aqueous misdirection, mannitol (12.5 to 25 g intravenously) or acetazolamide may be given.

When planning anesthesia for these patients, it is important to consider general anesthesia. If a patient has a shallow orbit, then an anesthetic block may cause significant posterior pressure and severe chemosis to a degree that may preclude the surgery from being performed.[2] Topical anesthetic surgery is not advised due to the risk of intraoperative aqueous misdirection. If a block is performed, then only a small volume (ie, <3 cc) should be given, and one should consider applying a Honan balloon (The Lebanon Corporation, Lebanon, Indiana) for at least 10 minutes to ensure a soft eye.[5]

Several recent case series have indicated that small-incision phacoemul-sification can be safe and effective in patients with nanophthalmos for both visual improvement and IOP control.[2][5][6] In eyes with no preoperative evidence of choroidal effusion, prophylactic sclerotomies were not necessary, and no postoperative effusions were reported.[2]

Factors to keep in mind when performing phacoemulsification in nanophthalmic eyes include the following:

If the IOP is still uncontrolled after lens extraction, a good next option is trabeculectomy. In nanophthalmos, the sudden decrease in IOP on open-ing the globe can result in rapid uveal effusion, secondary retinal detach-ment, vitreous hemorrhage, and aqueous misdirection.[3][6] Several surgical modifications to trabeculectomy have been suggested to minimize the risk of these complications, including the following[3]:

To decrease the risk of trabeculectomy failure because of the thick sclera, a deep sclerectomy should be considered. After dissecting the scleral flap just anterior to the surgical limbus, the underlying scleral tissue can be dissected off, leaving a thin layer of sclera over the uvea.

To our knowledge, there are no studies reporting on surgical results of glaucoma drainage devices in patients with nanophthalmos. Factors to consider are a small orbit and small globe, which may make placement of the plate challenging. Also, there may be limited space in the crowded AC for a tube.

It is important to remember that patients with nanophthalmos are prone to significant postoperative inflammation.[2] Frequent topical steroid administration should be a mainstay of postoperative treatment. consideration should also be given to subconjunctival or oral steroids to supplement control of inflammation. Topical nonsteroidal anti-inflammatory drugs (NSAIDs) may also be helpful. Other postoperative complications should be managed as with any other case.

It is of utmost importance to recognize aqueous misdirection and uveal effusions in nanophthalmic eyes. The following management steps are options when these complications occur during specific procedures or dur-ing the postoperative period.

When performing any type of incisional surgery on nanophthalmic eyes, there is an increased risk of intraoperative aqueous misdirection, which is characterized by elevated IOP and persistent AC shallowing, with or without accompanying iris prolapse. As noted above in the preoperative management section, mannitol or acetazolamide may help decrease the risk of aqueous misdirection by decreasing vitreous pressure and lowering IOP, respectively.

If intraoperative aqueous misdirection occurs with AC shallowing, the following steps may be taken in the given clinical setting:

The unsutured sclerotomy technique is preferred because it causes less posterior scleral weakness, which is a risk for rupture with retina and vitreous incarceration. The anterior site is protected by a thicker uveal layer and a firm vitreous base. These procedures may also be performed in the event of postoperative uveal effusion, and the effusion will likely resolve within 2 weeks.

Retrieved from "https://www.keogt.com/w/index.php?title=Glaucoma_Surgery_in_the_Nanophthalmic_Eye&oldid=913"
Category:
This page was last edited on 16 October 2019, at 16:29.
All text, tables, images and figures or any other content submitted to KEOGT become the exclusive property of KEOGT. The authors/submitter attests that they have all rights to submit the content and that the content is free for use by KEOGT without encumbrances (licensing fees, copyrights or trademarks) by other parties. By submitting content you hereby irrevocably assign and agree to assign to KEOGT, free and clear of any restrictions or encumbrances, all of your rights, title and interest in and to the content submitted.
Privacy policy
About Kahook's Essentials Of Glaucoma Therapy
Disclaimers