Chen and Walton[1] have described goniotomy as a prophylactic procedure in young ariridia patients (mean age 37 months) with iris adhesions to the posterior trabecular meshwork for greater than 180 degrees. This technique, in a select group of younger patients with early angle changes, may be effective in preventing aniridic glaucoma.[1] In their retrospective study that examined 50 eyes in 33 patients with aniridia, 49 (89%) had an intraocular pressure (IOP) <22 mm Hg without medications at last follow up. This was with an average of 1.65 procedures and average of 200 degrees of gonio-surgery. No operative complications were noted, and no eye had a decrease

in visual acuity at last follow­-up. This series suggests that the incidence of glaucoma development in aniridia patients may be significantly affected by goniosurgery. Goniotomy requires an adequate gonioscopic view of the angle, which can which can become more limited if worsening aniridic keratopathy develops over time. This procedure may be a good option in some younger aniridia patients, before more severe aniridic keratopathy develops, which can limit a clear view of the angle.

Trabeculotomy has also been shown to be a reasonable option in aniridia patients. The advantage of trabeculotomy is that it does not require a clear gonioscopic view and can be done in patients with corneal opacities that may limit the ability to perform goniotomy surgery. In a series of aniridia patients undergoing initial surgery for glaucoma, Adachi et al[3] found that 10 (83%) out of 12 eyes in trabeculotomy patients were controlled with 9.5 years of follow-up, compared with 3 (18%) out of 17 eyes that underwent goniotomy, trabeculectomy, traceculectomy combined with trabeculotomy, and Molteno implant.

Glaucoma drainage implants are effective at controlling pressure in aniridic glaucoma. Molteno implants were effective at controlling pres-sure in 5 (83%) out of 6 eyes in a series by Wiggens and Tomey.[4] Similarly, Baerveldt glaucoma drainage implants have been shown to control IOP in aniridic glaucoma.[5] Success with Ahmed valves in aniridia patients with glaucoma has also been demonstrated, but some patients required needling and 5-fluorouracil.[6] Glaucoma drainage implants have been the treatment of choice in my practice for older patients with aniridia, and I have been very satisfied with the level of pressure control achieved with these techniques (Figure 1A and B). The surgeon has to be prepared to manage surface-related complications such as tube erosions, which may occur at a higher rate in patients with severe surface disease and stem cell deficiency (Figure 2). 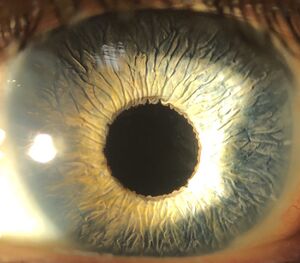 Figure 1A. The quality and appearance of modern iris prosthetics have advanced significantly in recent years. 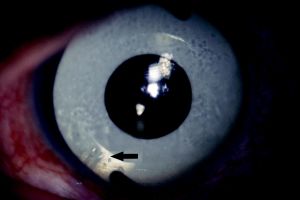 Figure 1B. Inferior nasal Baerveldt glaucoma drainage implant in a patient with aniridia and an artificial iris. The tube is seen well positioned in the anterior chamber, in front of the Ophtec 311 artificial iris (Ophtec, Boca Raton, Florida). 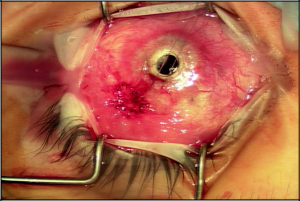 Figure 2. Aniridia patient with keratoprosthesis and prior pars plana Baerveldt glaucoma drainage tube insertion. A tissue patch graft (corneal patch) was required to repair a tube erosion in this patient.

Traditionally, cyclodestructive procedures have been reserved for refractory glaucomas or glaucomas associated with a very poor visual potential. Cyclocryotherapy procedures have been described in aniridia with limited success. In a series by Wiggens and Tomey,[4] cyclocryotherapy was successful in only 25% of eyes, and complications such as phthisis bulbi and progressive cataract were observed. Wagle et al[7] reported a much higher rate of phithis using cyclocryotherapy in pediatric glaucoma patients with aniridia resistant to maximal medical and surgical interventions compared with pediatric patients with glaucoma not associated with aniridia. This study cautions the use of cyclodestructive procedures in aniridia patients with glaucoma. It remains to be seen whether other cyclodestructive procedures, such as endoscopic cyclophotocoagulation or transscleral cyclophotocoagulation, which have been used to treat secondary glaucomas in childhood,[8] have a place in the treatment of glaucoma associated with aniridia.

Conflicting results have been reported in the literature with regard to the success of trabeculectomy for glaucoma in patients with aniridia. In a retrospective review of aniridic glaucoma patients under the age of 40 years following trabeculectomy (17 patients) and trabeculectomy with mitomycin C (MMC) (3 patients), the mean period of postoperative suc-cess (defined as IOP below 21 mm Hg with or without medicines) after the filtering surgery was 14.6 months (range: 2 to 54 months).[9] Other studies have shown minimal benefit of trabeculectomy in aniridia. Wiggens et al[4] found that trabeculectomy controlled the IOP in only 9% of cases in which it was ­performed.

Central corneal thickness has been shown to be increased in aniridia patients, which is an important consideration when measuring IOP by Goldmann applanation tonometry in these patients.[10][11] Clinicians may be overestimating IOP when using Goldmann applanation tonometry techniques in aniridia patients with increased central corneal thickness.

Stem cell deficiency and ocular surface disease are special concerns that occur in patients with aniridia. In some patients with aniridia, the surface failure can be successfully treated with stem cell transplantation or keratoprosthesis surgery. In the case of stem cell transplantation, it is often desirable to have tube shunt surgery prior to surface rehabilitation surgery, such as a keratolimbal allograft, to minimize the potential deleterious effects of glaucoma drops on the transplanted tissue. 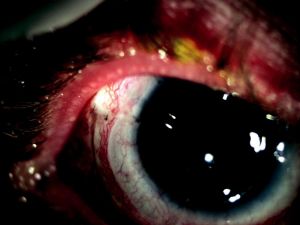 Figure 3. Patient that underwent combined cataract and Baerveldt glaucoma drainage implant surgery for a visually significant cataract and uncontrolled glaucoma. This patient has aniridia and prior keratolimbal allograft for stem cell deficiency. The corneal surface is clear following stem cell transplantation, and a well-positioned anterior chamber tube is present. 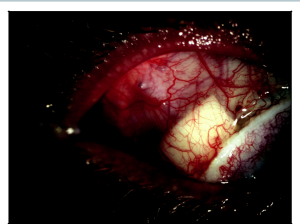 Aniridia fibrosis syndrome is described in aniridia patients that have undergone multiple surgeries in which there is progressive anterior cham-ber fibrosis. A retrolenticular and retrocorneal membrane forms, which can be seen clinically involving the ciliary body and anterior retina. Histopathologic evidence in this condition demonstrates extensive fibrotic tissue originated from the root of the rudimentary iris and entrapped in the intraocular lens (IOL) haptics.[12] Patients with aniridia and multiple prior surgeries (penetrating keratoplasty, tube shunts, cataract surgery) are at risk for aniridia fibrosis syndrome. Early recognition is important because early surgical intervention is recommended to prevent phthisis.[12] In our practice, pars plana vitrectomy with aggressive epiciliary membrane peeling has been successful in preventing some of these eyes from progressing to phthisis from ciliary fibrosis.

Retrieved from "https://www.keogt.com/w/index.php?title=Glaucoma_Surgery_in_Aniridia_Patients&oldid=1459"
Category:
This page was last edited on 17 October 2020, at 11:40.
All text, tables, images and figures or any other content submitted to KEOGT become the exclusive property of KEOGT. The authors/submitter attests that they have all rights to submit the content and that the content is free for use by KEOGT without encumbrances (licensing fees, copyrights or trademarks) by other parties. By submitting content you hereby irrevocably assign and agree to assign to KEOGT, free and clear of any restrictions or encumbrances, all of your rights, title and interest in and to the content submitted.
Privacy policy
About Kahook's Essentials Of Glaucoma Therapy
Disclaimers