ICE Syndrome is a group of corneal diseases that have in common corneal endothelial pathology, iris atrophy and in many cases, secondary angle closure glaucoma. The cause is not fully understood but has been linked inconclusively to underlying viral infection with Herpes Simplex Virus (HSV) or Epstein-Barr Virus (EBV). Polymerase Chain Reaction testing of corneal endothelial cells from patients revealed higher percentages of HSV DNA compared to normal controls. ICE syndrome is unilateral (a key distinguishing feature in the differential diagnosis) and sporadic with increased prevalence in women between the ages of 20 and 50. Glaucoma develops in approximately 50% of ICE Syndrome cases and is more frequent in essential iris atrophy and iris nevus syndrome which are discussed further below. 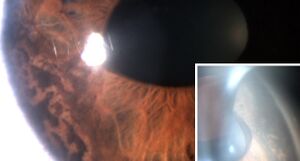 Figure 1: ICE Syndrome may present with ectropian uveae, corectopia and a sheet of abnormal endothelial cells growing over the iris and contracting to create iris nodules across the affected area. See the video link above for further description of the clinical presentation.

The corneal endothelium has a "beaten bronze" appearance on slit lamp biomicroscopy and may mimic the appearance of Fuchs Corneal Endothelial Dystrophy. Corneal edema is not uncommon and may initially be thought of as a byproduct of elevated intraocular pressure when patients first present for evaluation. This appearance has been linked to the replacement of normal corneal endothelial cells by cells with epithelium like features that have lost hexagonality and appear to be migratory with ability to cross Schwalbe’s line and spread over the trabecular meshwork and surface of the iris. These cells are not able to maintain the normal pumping mechanism provided by healthy corneal endothelial cells which maintain corneal osmotic balance and clarity. As iris changes progress, slit lamp examination (Figure 1) may reveal corectopia (displacement of the pupil from normal position), ectropion uveae (anterior exposure of the posterior pigmented part of the iris), and iris atrophy. Gonioscopy may reveal peripheral anterior synechiae (PAS) and the iris surface is often irregular to varying degrees depending on the specific variant of ICE syndrome. The PAS (described as “high” and with connections going anterior to Schwalbe’s line) and iris surface changes are linked to contraction of the sheets of migrating cells. Over time, the clinical presentation may mimic that of angle closure glaucoma as the angle is zipped closed and diagnosis may be difficult and confusing.

Iris Nevus Syndrome: Marked by corectopia with islands of iris nodules that form as sheets of abnormal endothelial cells over the iris contract and pinch off iris tissue.

Chandler Syndrome: This is the most common form (50%) and manifests as prominent corneal changes described as “beaten bronze” with eventual corneal edema and high IOP.

It is important to note that the three distinct groupings of ICE syndrome often have features of each other with the common denominator of abnormal endothelial cells leading to corneal edema and secondary angle closure glaucoma with significantly elevated IOP.

Angle Closure Glaucoma, Uveitic Glaucoma, Traumatic Glaucoma, Neovascular Glaucoma and Epithelial Down Growth. The corneal findings may be confused with Fuchs Dystrophy and pseudophakic bullous keratopathy. Other disease processes often included in the differential include posterior polymorphous corneal dystrophy, Axenfeld-Rieger Syndrome and Aniridia all of which are distinguishable from ICE with careful clinical examination (a helpful distinction is the unilateral nature of ICE).

IOP is treated with common topical pressure lowering therapeutics similar to other forms of glaucoma. Caution should be taken with carbonic anhydrase inhibitors which may further disrupt the osmotic pump action of endothelial cells. Miotics and Rho Kinase Inhibitors many not be as effective due to primary obstruction of the conventional aqueous outflow system. Trabeculectomy has not been met with great success in such cases due to closure of the sclerostomy and laser trabeculoplasty is also poorly effective in such cases. If IOP remains poorly controlled on medical therapy, glaucoma drainage device implantation can be performed with the goal of keeping the anterior chamber tube away from possible spread of cell sheets into the tube os. We tend to place our tubes in the sulcus and others have advocated performing a vitrectomy and placing the tube in the vitreous cavity to avoid any chance of tube occlusion. YAG laser can be used to address cell migration into the tube but surgical failure is not uncommon and transscleral cyclophotocoagulation is an option in such cases. Corneal edema can be treated with topical hypertonic saline solutions/gels which act by dehydrating the cornea. Severe corneal edema (as is more frequently the case with Chandler Syndrome) is treated with corneal transplant surgery (PKP, DSEK or DSAEK).

It has been my clinical experience that most ICE syndrome patients present with subtle disease that is managed with topical therapy and regular follow-up. In some cases, the disease appears to stop or even regress slightly. Less frequently, the disease is aggressive and may lead to significant glaucoma and corneal pathology with loss of vision despite diligent interventions.

Retrieved from "https://www.keogt.com/w/index.php?title=Iridocorneal_Endothelial_(ICE)_Syndrome&oldid=1552"
Category:
This page was last edited on 27 June 2021, at 20:39.
All text, tables, images and figures or any other content submitted to KEOGT become the exclusive property of KEOGT. The authors/submitter attests that they have all rights to submit the content and that the content is free for use by KEOGT without encumbrances (licensing fees, copyrights or trademarks) by other parties. By submitting content you hereby irrevocably assign and agree to assign to KEOGT, free and clear of any restrictions or encumbrances, all of your rights, title and interest in and to the content submitted.
Privacy policy
About Kahook's Essentials Of Glaucoma Therapy
Disclaimers