Malignant glaucoma is a relatively rare form of secondary angle closure glaucoma often correlating with intraocular surgery in eyes with narrow angles or synechial closure, although it can occur in open angles and even post non-invasive laser procedures like cyclophotocoagulation and laser iridotomy. Other terms used to describe the disease process include aqueous misdirection and ciliary block glaucoma. 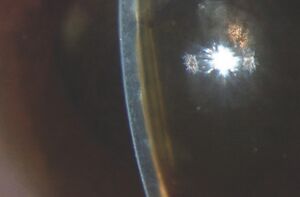 Patients often present with a red painful eye and decrease in vision. There is a higher incidence of malignant glaucoma in hyperopic eyes (short axial length). The intraocular pressure (IOP) is often very elevated but may present with “normal” or lower pressures leading to confusion about the diagnosis. Key to diagnosis is a flat chamber with both iris and lens positioned anteriorly and an almost flat anterior chamber (figure 1). The cornea shows signs of edema from both the elevated IOP as well as iris and lens touch. This should be distinguished from any post-operative swelling of the cornea. The opposite eye central anterior chamber is typically deep and this is one clue to distinguish malignant glaucoma from acute primary angle closure where the anterior chambers of both eyes are more symmetric. Ultrasound biomicroscopy can be useful in identifying anatomical structures when the corneal edema hinders slit lamp examination (figure 2). Optically clear “aqueous zones” have been described in the vitreous cavity although I have not seen this in my experience. History of intraocular surgery and laser should be explored including pars plana vitrectomy, trabeculectomy and the lasers mentioned earlier. Starting or stopping both cycloplegics as well as miotics have also been connected to the development of malignant glaucoma and should be part of the clinical history taking when possible.

The cause of malignant glaucoma or aqueous misdirection is controversial. It is classically thought to be due to posterior misdirection of the aqueous humor with relative block of fluid flow past the lens equator, vitreous face and ciliary processes. Other factors such as propensity for the choroid to expand and for reduced vitreous fluid conductivity have also been proposed.

Malignant glaucoma is a diagnosis of exclusion and more common processes should be considered and ruled out (with use of clinical exam and ultrasound as appropriate) including:

Intensive cycloplegia (Atropine 1% qid) and use of IOP lowering medications are the mainstay of early therapy. Avoid use of miotics like pilocarpine which can worsen anterior chamber shallowing.

Laser peripheral iridotomy (YAG) should be completed when possible and may help distinguish the clinical picture from a primary angle closure (PAC) process. The chamber often deepens in the setting of PAC but does not with malignant glaucoma unless the vitreous face is also disrupted by focusing laser energy through the lens zonules and onto the anterior vitreous face.

While the literature suggests that half of malignant glaucoma cases can be controlled with medications and laser alone, it is my experience that surgical intervention with irido-zonulo-hyaloidotomy (IZH) is often required and should not be delayed if less invasive approaches are not successful. Posterior vitrectomy with meticulous anterior hyaloido-zonulectomy is an approach that can be employed if all the above techniques fail although IZH has been quite successful in our hands.

Retrieved from "https://www.keogt.com/w/index.php?title=Malignant_Glaucoma&oldid=1572"
Category:
This page was last edited on 24 May 2022, at 12:10.
All text, tables, images and figures or any other content submitted to KEOGT become the exclusive property of KEOGT. The authors/submitter attests that they have all rights to submit the content and that the content is free for use by KEOGT without encumbrances (licensing fees, copyrights or trademarks) by other parties. By submitting content you hereby irrevocably assign and agree to assign to KEOGT, free and clear of any restrictions or encumbrances, all of your rights, title and interest in and to the content submitted.
Privacy policy
About Kahook's Essentials Of Glaucoma Therapy
Disclaimers