A 34 year-old male is seeing you for the first time with complaints of eye pain after exercise. He is myopic (-6D OU) and otherwise healthy with negative family history. On examination, he has iris transillumination defects and dense pigment on the endothelium of the cornea OU with gonioscopy revealing angles that are darkly pigmented bilaterally. Intraocular pressure (IOP) is 24 Right Eye and 28 Left Eye. What do you next? 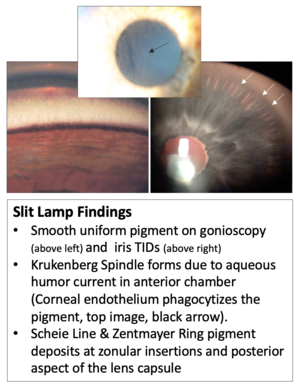 Pigment Dispersion Syndrome (PDS) manifests with the triad of densely pigmented trabecular meshwork (TM) with uniform pigmentation (often described as velvety with presence of a Sampaolesi line), pigment coating on the corneal endothelium (Krukenberg spindle) and mid peripheral iris transillumination defects (TIDs). Pigment is released from the iris, which is posteriorly bowed and often referred to as reverse pupillary block (see below for more information), and this occurs due to rubbing of the posterior iris on the lens zonules. Contact between the posteriorly bowed iris and the zonules increases with blinking and the normal physiological movement of the iris causes significant rubbing and release of pigment granules, a process sometimes described as a “pigment storm”. Pigment storms are noted after exercise and patients often complain of glare, halos, blurry vision and eye pain after exercise relating to acute elevation in IOP although some studies have not found exercise to cause pigment storms or elevation in IOP. TM cell toxicity occurs due to phagocytosis of the debris as pigment accumulates in the angle and this leads to disruption of aqueous outflow with elevation in IOP and development of pigment dispersion glaucoma or pigmentary glaucoma. This is different from the cause of IOP elevation due to PXF which is caused by mechanical plugging of the angle without toxicity to the TM.

The incidence and prevalence of PDS and PG is poorly characterized. One small study noted the prevalence of pigment dispersion syndrome in white patients was 2.45% (Ritch 1993). Another study found PDS present in 25.9% of patients seeking refractive laser surgery (Doane 2019). This might be an indication of the high rate of myopia in patients with this disease process. Other published studies and estimates range between 1/25 patients in glaucoma clinics to the Olmsted County, Minnesota Study reporting 4.8/100,000 for PDS and 1.4/100,000 for PG. The Olmsted County, Minnesota data reported the risk of developing PG from PDS was 10% and 15% at 5 and 15 years, respectively. An initial baseline IOP greater than 21 mm Hg was also related to conversion from PDS to PG.

There is some evidence that PDS/PG can be inherited in an autosomal dominant fashion with the gene responsible mapped to the telomeric end of the long arm of chromosome 7 (7q35-q36). Keeping this in mind, it is important to try and examine family members when possible or to have them referred to nearby eye care professionals when possible. While the ratio of Males to Females effected by PDS is nearly equivalent, there is a higher risk for developing PG in male patients (up to 5:1 ratio vs females). Male patients (typically diagnosed in the third decade) also tend to be younger than female patients (typically diagnosed in the fourth decade). Many, but not all, diagnosed patients have moderate myopia. The disparity in incidence of PDS and PG in different ethnic groups is poorly characterized. An important point to make here is that TIDs in darkly pigmented irides may be harder to identify and the diagnosis might be missed in these cases. As alluded to earlier, anatomically, PDS and PG patients tend to have concave irides with posterior iris insertion and flatter corneas. Pigment liberation from the iris in patients with PDS/PG may decrease with age as a result of thickening of the crystalline lens and a change in apposition of the posteriorly bowed iris against the lens zonules. As a rule of thumb, pigment shedding decreases around the time that presbyopia sets in and thus coincides with patients reaching their early to mid forties.

Pigment storms: Acute and large deposition of pigment granules in the angle that may or may not relate to exercise or physical activity. Can lead to spikes in IOP along with pain and glare/halos.

Patients with PDS/PG may exhibit what has been termed the “pigment reversal sign”. This is when the TM begins to recover (after pigment shedding stops due to LPI or lens thickening for example), with the normal pigment pattern of the angle (darker inferiorly and lighter superiorly) reverses and the pigment band becomes darker superiorly.

Common Slit Lamp Findings: •Krukenberg Spindle: clustering of pigment on the corneal endothelium which forms due to aqueous humor currents in the anterior chamber (Corneal endothelium phagocytizes the pigment).•Smooth uniform pigment on gonioscopy (above left) •Iris Transillumination Defects: Caused by rubbing of the iris against the zonules. See right image. •Scheie Line & Zentmayer Ring: pigment deposits at zonular insertions and posterior aspect of the lens capsule that in my experiences are almost always seen but not always clearly noticeable without close high magnification on slit lamp exam.

Ocular pathologies that can lead to heavy pigmentation in the angle include pseudoexfoliation, uveitis and trauma. Iris transillumination defects can occur focally post viral infections (HZV/HSV), post UGH syndrome due to misplaced or anteriorly vaulted IOL structures (haptics) or post trauma (for example intraocular surgery). Pigment on the corneal endothelium can also occur post uveitis as well as trauma. Posterior bowing of the iris (examined with ultrasound biomicroscopy) can help distinguish PDS/PG from other processes when confusion remains regarding the diagnosis but is often not needed. A final note of caution is that anterior segment tumors can shed pigment leading to heavily pigmented angles and care should be taken to exclude this possibility.

Medications are used as per typical regimen for other types of glaucoma like POAG and NTG. Past advocacy for use of pilocarpine to address reverse pupillary block has been mostly abandoned due to the induced myopia and other adverse events associated with the medication (spasms/pain).

Laser Peripheral Iridotomy (LPI): Several studies have examined the utility of LPI in patients with PDS/PG to reverse the posterior bowing of the iris. The results from these studies are conflicting and practice patterns differ widely between practitioners.

•Scott et al. Ophthalmology. 2011 Mar;118(3):468-73•116 patients no benefit of Nd:YAG LPI in preventing progression from PDS with ocular hypertension to PG within 3 years of follow-up

•Gandolfi et al. JAMA Ophthalmol. 2014 Dec;132(12):1433-8.•10 year follow up of 72 patients with bilateral PDS to assess risk of developing elevated IOP from baseline (one eye randomized to LPI and the other eye did not receive LPI in a higher risk group) LPI, when performed on high-risk eyes, reduced the rate of IOP elevation to the same level as the low-risk eyes.•Reistad (AGS) J Glaucoma. 2005 Aug;14(4):255-9. •60 patients who had PG. One eye was treated with LPI and the contralateral eye was not treated with LPI. There was a lack of significant and clear benefit to LPI controlling IOP.

Our Approach for LPI: I discuss with patients and provide available data•If the patient is younger (<60) with active pigment shedding and CE is not on the horizon, I recommend LPI as a low risk option •My experience in these patients is that dispersion is less, but this is anecdotal

Invasive surgery such as MIGS/Angle Surgery as well as Trabeculectomy and GDDs are all good choices to treat PG when needed and the course of treatment often follows that of POAG/NTG without major concerns or differences.

It has been noted in past publications that retinal detachment may occur more frequently in patients with pigment dispersion syndrome and pigmentary glaucoma. Wesely and colleagues (Weseley, 1992) reported on the retinal findings of 60 patients with PDS or PG. Twenty percent of patients were noted to have lattice degeneration in at least one eye. Full-thickness retinal breaks were found in seven patients (11.7%) and asymptomatic retinal detachments were noted in two patients (3.3%). They concluded that retinal pathology was common in PDS and PG, however associated with myopia and other predisposing factors were not clearly demarcated in their report. There remains an overall perception that PDS and PG are associated with retinal pathology (independent of the association with Myopia) and this requires further investigation.

In the case scenario above, the patient was treated with bilateral LPIs and IOP stabilized for several years until a slow but consistent elevation of pressure was noted along with slight thinning of the RNFL inferiorly on SOCT testing in both eyes. Latanoprost was started OU qhs and the patient remains under close q6month follow up with HVF/SOCT ordered to watch for progression of disease.

Retrieved from "https://www.keogt.com/w/index.php?title=Pigment_Dispersion_Syndrome_and_Pigmentary_Glaucoma&oldid=1382"
Category:
This page was last edited on 5 August 2020, at 22:13.
All text, tables, images and figures or any other content submitted to KEOGT become the exclusive property of KEOGT. The authors/submitter attests that they have all rights to submit the content and that the content is free for use by KEOGT without encumbrances (licensing fees, copyrights or trademarks) by other parties. By submitting content you hereby irrevocably assign and agree to assign to KEOGT, free and clear of any restrictions or encumbrances, all of your rights, title and interest in and to the content submitted.
Privacy policy
About Kahook's Essentials Of Glaucoma Therapy
Disclaimers