Incisional iridectomy was first introduced by Albrecht von Graefe as a procedure for the treatment of glaucoma in Germany during the period of 1855 to 1860.[1] The iridectomy performed by von Graefe involved excision of the iris through a scleral incision without a conjunctival flap. von Graefe thought that it was the iris tissue itself that, when removed, lowered the intraocular pressure (IOP).[2] At that time, this was the only surgery widely used to treat all forms of glaucoma, and it was plagued with complications.

Today, surgical iridectomy is used to treat angle-closure glaucoma secondary to a pupil block mechanism. In modern practice, laser iridotomy is preferred over incisional iridectomy because it is quick and easy to perform, has a high success rate, has a low complication rate, and has fewer risks when compared with incisional iridectomy.[3] Laser iridotomy is performed by utilizing the Nd:YAG laser and/or argon laser to create a communication between the anterior and posterior chamber, which equalizes the pressure between the 2 compartments, thus reducing the risk of angle-closure glaucoma.

Although largely replaced by laser iridotomy, situations may still arise in which an incisional iridectomy is the preferred technique. Specific ­situations that may require surgical iridectomy include the following:­ 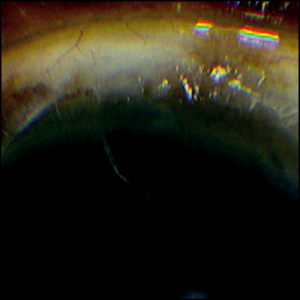 In addition to the previous situations, surgical iridectomy may be ­combined with other surgical procedures, including the following:

Other less common situations necessitating surgical iridectomy include the following:

A thorough ophthalmic and medical history and a complete ophthalmic examination should be performed prior to surgical iridectomy. medication history is important to inquire about use of anticoagulants including warfarin and nonsteroidal anti-inflammatory medications, such as aspirin and ibuprofen. Although the urgent or emergent nature of surgical iridectomy often prevents sufficient time off the medication to reverse the anticoagulant effect, anticoagulants should be stopped if medically possible. This is often done in conjunction with the patient’s primary care physician. On examination, particular attention should be paid to corneal clarity, ­presence or absence of conjunctival scarring, the status of the lens, and presence or absence of silicone oil in the eye. Preoperative assessment of these issues is important to determine the location of the planned iridectomy.

Appropriate informed and signed consent should be obtained from the patient or legal guardian. One hour before surgery, one drop of Vigamox (moxifloxacin 0.5%), or an equivalent antibiotic, and one drop of pilocarpine 1% are instilled into the operative eye every 5 minutes for 3 doses. The broad antibiotic spectrum of a fourth-generation fluoroquinolone provides prophylaxis against ocular infections. The direct cholinergic properties of pilocarpine cause miosis, placing the iris on stretch and facilitating forma-tion of a basal iridectomy.

Surgical iridectomy should be performed in the operating room under monitored anesthesia care. A subconjunctival injection of 1% preservative-free lidocaine is usually adequate for anesthesia. This is performed by injecting 0.2 to 0.4 mL of lidocaine through a 30-gauge needle at the planned site of the conjunctival incision.

If anesthesia and akinesia are required, or if there is significant preoperative pain, as can be present with an attack of acute angle-closure crisis, a retrobulbar block with a 50-50 mixture of 4% lidocaine and 0.75% bupivicaine may be considered instead of local anesthesia. The block is performed by injecting 2 to 4 mL of the mixture into the muscle cone with a blunt 23-gauge needle (Atkinson retrobulbar, Eagle Labs, Rancho Cucamonga, California). A retrobulbar block carries with it specific complications, such as retrobulbar hemorrhage and globe perforation. In the rare event that such a complication were to occur, it should be able to be appropriately managed by the surgeon.

Patient situations in which general anesthesia with an endotracheal tube or laryngeal mask airway should be considered include young age, tremor, and dementia.

Povidone-iodine 5% is used to prepare the eyelids, skin, and conjunctive. The eyelids are then draped in the standard ophthalmic surgical fashion. An eyelid speculum is used to retract the drape and lashes from the surgical field. Blunt Westcott scissors are used to perform a 3-mm superior conjunctival peritomy. Wet-field cautery is used to provide adequate hemostasis.

If technically possible, a 15-degree paracentesis incision knife is used to create a temporal clear corneal paracentesis (this may be technically challenging due to shallow anterior chamber depth in phakic patients).

The 15-degree blade is then used to enter the anterior chamber parallel to the iris at the end of the corneoscleral tunnel. The iris is mechanically prolapsed through the incision by gently pushing on the posterior lip of the wound with a blunt instrument. The iris is then grasped with the 0.12-mm forceps and cut with iris scissors. Care must be taken to incise both the stromal and pigment layers of the iris to create a full-thickness iridectomy. The iris is repositioned into the anterior chamber by gently stroking the cornea with a blunt instrument, such as a muscle hook.

The scleral wound is closed with 2 interrupted sutures at the corners of the scleral flap with a 10-0 nylon suture on a spatulated needle (Ethilon TG160-6, Ethicon, Somerville, New Jersey). The conjunctiva is then closed with an 8-0 polyglactin 910 suture on a vascular needle (Vicryl BV130-4, Ethicon).

Postoperatively, the patient is routinely started on atropine 1% once daily, Vigamox 4 times a day, and prednisolone acetate 1% 4 times a day. 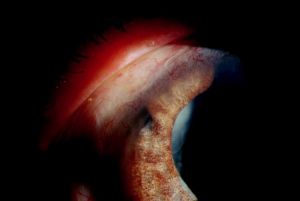 Figure 27-2. Peripheral iridectomy created with the vitrector using a posterior approach in conjunction with pars plana vitrectomy for management of aqueous misdirection.

Some surgeons have used a vitrector to create an iridectomy.[6][8] This has been performed through a clear corneal wound with the benefits of preserving the conjunctiva and avoiding a scleral tunnel. This procedure can be performed with an irrigation port or under a dispersive ophthalmic viscoelastic device (OVD) to maintain the anterior chamber. If the patient is phakic, the OVD should be placed in the ciliary sulcus, allowing for protection against damage to the lens. When positioning the vitrector, the aspiration port should be facing the iris tissue at the site of the planned iridectomy. The vitrector setting should be placed on irrigation-aspiration-cut mode, with the cut rate set at 20 cuts per minute.[9] After the iris is engaged, the vitrector is used to fashion a small peripheral iridectomy. The vitrectomy approach is an ideal method to create a small superior iridectomy after temporal phacoemulsification with placement of an anterior chamber IOL.

­vitrectomy for the treatment of aqueous misdirection when Nd:YAG lysis of the anterior hyaloid face fails to create a communication between the anterior and posterior chambers. 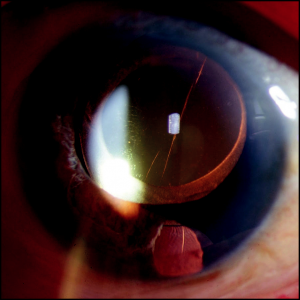 The location of the iridectomy is determined by the clinical situation. The 12 o’clock position is the preferred location for iridectomy. The upper lid covers the iridectomy opening, reducing the incidence of visual disturbances. The iridectomy size should be such that it can be completely covered by the upper lid. Theoretically, an iridotomy should be at least 150 to 200 µm to safely prevent angle closure.[10] This should not be an problem when creating a surgical iridectomy because this technique will produce an iridectomy that is larger than 200 µm. Partially exposed iridectomies may have increased risk for visual disturbances such as monocular diplopia, lines, crescents, shadows, and ghost images.[11] After vitrectomy with placement of silicone oil, it is appropriate to place an iridectomy inferiorly to prevent pupil block caused by the oil.[12] Silicone oil (specific gravity: 0.97) floats above the aqueous and can potentially occlude a superior iridectomy. An inferior iridectomy breaks this block, allowing free passage of aqueous between the anterior and posterior chambers. A superior iridectomy may be created if heavy silicone oil is used. An inferior iridectomy may also be considered in situations in which future glaucoma surgery is being contemplated. In this case, anatomical preservation of the superior conjunctiva is important to allow for successful filtering surgery and bleb formation (Figure 27-3).

Incomplete iridectomy is caused when only the anterior layers of the iris tissue are removed, leaving the posterior pigmented layer (Figure 27-4). An incomplete iridectomy may lead to occlusion of the sclerostomy and elevation of the IOP. Patency of the iridectomy should be confirmed intraoperatively by observing a red reflex through the iridectomy or by wiping the iris specimen on the surgical drape, demonstrating deposition of pigment. Intraoperatively, the exposed posterior pigmented layer can be aspirated with a 25-gauge cannula as described by Hoffer.[5] If discovered postoperatively, argon or Nd:YAG laser may be used to complete the iridectomy.[13]

Postoperative shallow or flat anterior chamber are also caused by wound leak. Seidel testing should be performed using a moistened fluorescein strip at the end of the procedure to evaluate for the presence of a leaking wound. Meticulous surgical technique and use of a beveled triplanar scleral tunnel helps prevent persistent wound leak and conjunctival bleb formation. Wound leak can be managed pharmacologically with aqueous suppressants, cycloplegics, and topical antibiotics. Additionally, placing a bandage contact lens or patching can help the conjunctiva heal at the limbus, eliminating the leak. Persistent leaks may need to be operatively repaired. In the setting of a shallow or flat anterior chamber, the IOP measurement is important. If the IOP is low, there may be conjunctival bleb formation with overfiltration or wound leak. Choroidal effusion often presents as a shallow flat anterior chamber with low IOP. If the anterior chamber is flat and the IOP is high, one must consider choroidal haemorrhage or aqueous misdirection in the differential diagnosis. After confirmation of patent iridectomy and watertight wound, evaluation of the posterior chamber should be performed by indirect ophthalmoscopy or B-scan ultrasonography. Choroidal effusion or hemorrhage and aqueous misdirection should be managed appropriately, potentially in conjunction with a retinal surgeon.

Other complications of iridectomy include cataract and hyphema. Cataract may develop from inadvertent injury to the crystalline lens or from disruption of the lens capsule. This can be managed conservatively unless significant inflammation or worsening vision develops, necessitating lens extraction. Hyphema may develop from transection of iris vessels. Although usually not necessary, cautery may be used to help minimize iris bleeding. If hyphema does occur, it is usually minimal and transient, and observation is advised. If necessary, anterior chamber washout with balanced salt solution and injection of OVD can be employed to tamponade the bleeding during the surgery.

Although largely replaced by laser iridotomy, incisional iridectomy is necessary in a variety of situations and remains an important component of the glaucoma surgeon’s armamentarium. Newer variations of the traditional iridectomy include using a clear corneal approach or employing the use of the vitrector as a cutting instrument. It is imperative for the glaucoma surgeon to understand and be able to manage the potential postoperative complications of iridectomy.

Retrieved from "https://www.keogt.com/w/index.php?title=Surgical_Iridectomy&oldid=1018"
Category:
This page was last edited on 16 October 2019, at 20:27.
All text, tables, images and figures or any other content submitted to KEOGT become the exclusive property of KEOGT. The authors/submitter attests that they have all rights to submit the content and that the content is free for use by KEOGT without encumbrances (licensing fees, copyrights or trademarks) by other parties. By submitting content you hereby irrevocably assign and agree to assign to KEOGT, free and clear of any restrictions or encumbrances, all of your rights, title and interest in and to the content submitted.
Privacy policy
About Kahook's Essentials Of Glaucoma Therapy
Disclaimers