Two basic types of glaucoma drainage implants are used in glaucoma surgery. One type that has no valve, and 1 type that has a valve mechanism to moderate against hypotony. Both types have a silicone tube that is attached to a plate with a ~0.3mm-lumen.[1] The Ahmed ClearPath (New World Medical, Rancho Cucamonga CA), Baerveldt (Johnson and Johnson Vision, Jacksonville FL) and Molteno (Molteno Ophthalmic Limited, Dunedin, New Zealand) glaucoma drainage implants do not have a valve to restrict flow, and typically require a ligation suture to restrict flow in the early postoperative period to avoid hypotony. The first tube shunt equipped with a valve was the Krupin Valve (E. Benson Hood Laboratories, Inc., Pembroke, Massachusetts) in 1976, which is a tube attached to a plate with a unidirectional valve. The Ahmed valve implants (New World Medical Inc., Rancho Cucamonga, CA) are now the most commonly utilized glaucoma drainage implants equipped with a valve. 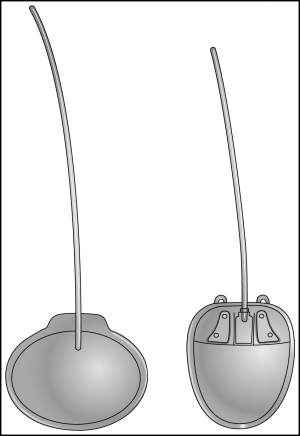 In both valved implants and nonvalved implants there exists a variety of sizes and, in some models, different implant material composition. Increasing the size of the glaucoma drainage implant plate is a strategy that has been used to try and achieve better intraocular pressure (IOP) lowering results. Heuer et al[2] showed lower postoperative IOPs in patients that received double-plate (270mm2) compared to single-plate (135 mm2) Molteno implants. Alternatively, Britt et al[3] found no additional IOP lowering benefit of the Baerveldt 500 mm2 as compared to the 350 mm2 in a randomized clinical trial. This suggests that there may be a benefit of lower IOP with increasing implant surface area to a certain degree, but this advantage is not necessarily consistent as implant size increases. Table 7-1 illustrates the characteristics of some of the most commonly used glaucoma drainage implants.[4]

Valved implants were designed to lower the risk of hypotony by having a pressure valve that only lets fluid through the tube and into the subconjunctival space of the implant plate when the IOP exceeds around 8 to 11 mm Hg, depending on the type of the valved implant. They also provide the advantage of lowering pressure sooner, because they are designed to establish filtration immediately upon insertion (Figure 7-1).

Ahmed glaucoma drainage implants are made with either polypropylene or silicone for the plate body composition. The characteristics of the plate material are thought to have some effect on the capsule that forms over the plate. It has been shown that the polypropylene endplate of the Ahmed glaucoma valve induces greater amount of inflammation than the silicone end plate of the Baerveldt implant in the rabbit subconjunctival space.[5] The amount of inflammation generated by different biomaterials may influence capsular thickness and resistance characteristics, which can affect IOP. Clinically, it has been shown that the popular Ahmed model FP7 may provide better pressure control when compared to the Ahmed S2 polypropylene model.[6] Production of the S2 model Ahmed Valve has now been discontinued.

Because the valve mechanism is designed to reduce the chance of hypotony, valved implants are well suited for patients with compromised aqueous secretion. Patients with uveitis, ciliary body ischemia or fibrosis, and prior cyclodestructive procedures are good candidates for a valved implant, such as the Ahmed. Valved implants can also be ideal for patients that need immediate IOP lowering with a very high preoperative IOP (eg, neovascular glaucoma). The Ahmed silicone models include the FP7 (Flexible plate), FP8 (Flexible plate pediatric).

Krupen et al[7] introduced the unidirectional, pressure-sensitive valve in 1976. The Krupin valve is designed to open at a pressure of 11 mm Hg and close at a pressure of 9 mm Hg.[8] This was the first valved implant to reduce the incidence of early postoperative hypotony following aqueous drainage implant surgery.[8] This valve has become less popular with the advent of the Ahmed glaucoma valve, which was introduced in 1993.

Nonvalved implants do not contain a valve that restricts flow through the tube. As described previously, the nonvalved implants must be flow-restricted to allow time for adequate capsule formation and prevent immediate postoperative hypotony. Nonvalved implants can achieve immediate postoperative IOP control when tube fenestrations are performed. Tube fenestrations allow aqueous to drain from the tube, and into the subconjunctival space anterior to the suture ligation.[9] Although fenestrations are often helpful, they are not necessarily the most consistent way to lower pressure, as there is always some variability of the magnitude and the duration of their effect. Some surgeons prefer to combine a trabeculectomy with insertion of the nonvalved ligated implant to achieve immediate post-operative pressure control. This can be a very reliable way to titrate IOP when immediate pressure lowering is desired and the surgeon prefers the insertion of a nonvalved implant (Figure 7-2). 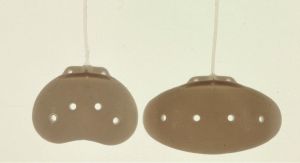 The Baerveldt 102-350 has a 350 mm2 plate, as well as a smaller plate attached to the tube that is sutured to the sclera in the area of the pars plana. This smaller plate has a Hoffman elbow design that allows direct insertion of the tube into the pars plana, and is done through a 20-gauge pars plana sclerostomy incision. 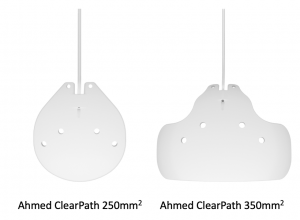 Figure 7-3: The Ahmed ClearPath Glaucoma Drainage Device is available in a 250mm2 and 350mm2 model.

The Ahmed ClearPath implant was introduced to the US market in 2019 and is available in a 250mm2 and 350mm2 model (Figure 7-3). The plates are made from medical grade flexible silicone and both models feature a silicone tube with a ~0.3mm inner diameter. Both devices come pre-packaged with a 23gauge needle as well as a 4-0 prolene suture which may be used as a rip cord for surgeons who desire to use it. Implantation of both models is similar to the traditional steps take for the Baerveldt Glaucoma Implant with some notable exceptions. The ClearPath devices are more flexible and has a lower plate profile compared to the Baerveldt devices. This allows for more maneuverability when placing the plate in position to suture it to the underlying sclera. The 250mm2 model is shaped to allow for placement between muscles, compared to the Baerveldt 250mm2 which often requires some manipulation of adjacent rectus muscles, and the 350mm2 model is flexible enough to be bent and tucked under the recti without need for extensive muscle manipulation. The enhanced flexibility of the plates may require more deliberate dissection of the conjunctiva/Tenon's away from the sclera to avoid bending the device during insertion over the sclera. Both models feature suture holes that are low in profile and extend anteriorly to allow for efficient suturing 6-8mm away from the limbus (Baerveldt and Ahmed devices are implanted 8-10mm away from the limbus). Creation of fenestrations and ligature suture as well as use of a ripcord is standard to other non-valved devices. The silicone tube paired with the ClearPath device is slightly thicker than that of the Baerveldt implant enhancing the insertion manuever into the anterior chamber but also requires slightly more force when placing the ligature suture to occlude flow. The experience with the ClearPath device is still early and clinical trials are in progress.

The Molteno glaucoma implant is another popular aqueous drainage implant design without a valve mechanism. Molteno implants come in multiple designs and have been studied for over 30 years in the management of glaucoma. In a rabbit model in 1969, Molteno first introduced the concept of a translimbal tube attached to an acrylic plate to facilitate aqueous drainage.[12]

The Molteno single-plate design is ideal for single quadrant use and is relatively easy to insert with a relatively small conjunctival dissection. This is the original aqueous drainage implant design.

The double-plate Molteno has a larger surface area, which is ideal when more IOP lowering effect is desired. This implant has the flexibility of additional postoperative control. The tube connecting the two plates, or the tube entering the eye, can be ligated with a temporary or permanent suture.[13] A ligature suture applied to the connecting tube can restrict excess flow to the second plate, which can give the surgeon more control over the amount of aqueous drainage depending on a patient’s pressure lowering needs.

The newer Molteno3 has a more flexible, larger plate than the earlier designs, and has an oval subsidiary ridge designed to form a biological valve to reduce postoperative hypotony.[13] The biological valve works by limiting aqueous flow to the primary area of drainage until IOP increases to the point where the resistance of the overlying tissue is overcome, allowing aqueous drainage to expand over the whole plate.[13] The use of the biological valve on the Molteno3 is intended for glaucomas with very high preoperative IOPs, where acute pressure lowering is needed. It can be helpful in cases where a traditional valved shunt may become occluded by clot or fibrin, such as neovascular or inflammatory glaucomas. Hypotony can still be seen in the early postoperative period with this device if it is not ligated. Therefore, in most routine glaucoma cases, the Molteno3 is ligated similar to a nonvalved shunt and the biological valve mechanism is not utilized in the early postoperative period.

The Schocket glaucoma implant, also known as the ACTSEB (anterior chamber tube shunt to encircling band), was described by Schocket et al[14] for the treatment of neovascular glaucoma. The Schocket implant technique utilizes a silastic tube used for nasolacrimal intubation (diameter 0.30 mm). One end is placed underneath and sutured into the groove of a #20 retinal encircling band that is placed underneath the rectus muscles. The other end is placed into the anterior chamber to allow aqueous outflow to the capsule that forms around the encircling band. Modifications of the Schocket technique have been reported using smaller buckle element segments.[15] This implant type has the advantage of being relatively inexpensive and can be used in places where glaucoma drainage implants are difficult to obtain, such as in developing countries. However, this implant is currently rarely used due to the existence of more modern implant designs.

Retrieved from "https://www.keogt.com/w/index.php?title=Types_of_Glaucoma_Drainage_Implants&oldid=1122"
Categories:
This page was last edited on 4 November 2019, at 13:17.
All text, tables, images and figures or any other content submitted to KEOGT become the exclusive property of KEOGT. The authors/submitter attests that they have all rights to submit the content and that the content is free for use by KEOGT without encumbrances (licensing fees, copyrights or trademarks) by other parties. By submitting content you hereby irrevocably assign and agree to assign to KEOGT, free and clear of any restrictions or encumbrances, all of your rights, title and interest in and to the content submitted.
Privacy policy
About Kahook's Essentials Of Glaucoma Therapy
Disclaimers