Since its inception in the 1960s, the gold standard for surgical treatment of glaucoma has been the trabeculectomy.[1] The goal of this glaucoma filter-ing surgery is to create an alternative route for aqueous humor to drain out of the eye and into a subconjunctival reservoir, thus creating a bleb. More recently, incremental advancements in microsurgical device manufacturing has paved the way for the introduction of the Ex-Press glaucoma filtration device as a valuable adjunct to trabeculectomy. 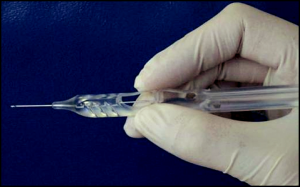 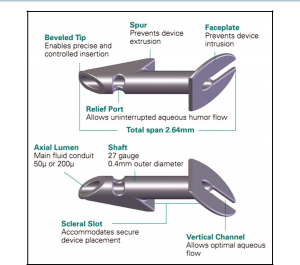 The Ex-Press glaucoma filtration device is a nonvalved, MRI-compatible, stainless steel device that is inserted under a scleral flap into the anterior chamber to shunt aqueous to a subconjunctival reservoir.[2] The device is approximately 3 mm in length and has a 400-µm external lumen. Currently, the R and P models are available, with the P model being the most widely used. The P model is available with 50 - or 200-µm internal lumens (Figure 39-1). The devices are preloaded on an injector device to minimize intraoperative device manipulation and for simplification of delivery (Figure 39-2).

The surgical technique for a trabeculectomy using the Ex-Press device is very similar to the standard trabeculectomy procedure. However, there are key differences that will be noted. The anesthetic used for this procedure should not vary from what the surgeon is originally accustomed to with traditional trabeculectomy. We prefer a retrobulbar block containing a half-and-half mixture of 0.4% lidocaine, 0.75% marcaine, and added wydase for a total of 5 cc. The patient is prepped and draped in the same fashion and a standard fornix or limbal-based conjunctival flap is then created to provide access to the scleral bed at the limbus. Wet-field cautery is used for homeostasis and a scleral flap is then created with the surgeon’s blade of choice. The scleral flap should extend into clear cornea. Note: Close attention should be paid to the following: (1) fashion a scleral flap that is a least half-thickness wide and, at minimum, 3- to 3.5-mm wide and long; and (2) create a uniplanar flap dissection. Both of these critical points will ensure adequate coverage of the device face plate to avoid overfiltra-tion and conjunctival extrusion.[3][4][5][6][7][8][9][10][11][12][13] As with traditional trabeculectomy, the shape of the flap (triangular, pentagonal, rectangular) does not seem to affect the outcome. Antifibrotics are then used in the usual manner for trabeculectomy. In anticipation of device placement, a clear corneal para-centesis is then created to provide access for reformation of the anterior chamber and assessment of aqueous egress. 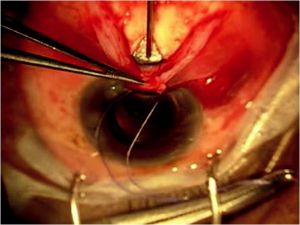 Figure 39-3. Creation of scleral ostia with a 25-gauge needle. 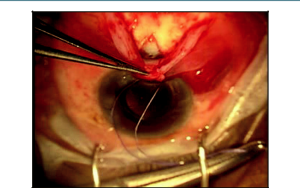 The prefashioned scleral flap is then lifted and the “blue line” (trabecular meshwork) adjacent to clear cornea should be identified. Next, a  25-gauge needle (a 26- or 27-gauge needle may also be used) is then used to enter the anterior chamber just posterior to the blue line (Figure 39-3). The needle should be directed parallel to the iris plane, and the tip of the needle should fully enter the anterior chamber. Care should be taken to avoid needle-to-iris or -lens contact to minimize complications. However, the needle must completely enter the eye to create a patent scleral ostia for proper insertion of the implant. The Ex-Press, which is preloaded on an injector, is then threaded into the eye through the ostium (Figure 39-4) created in the previous step. Note: Close attention should be paid to enter-ing the anterior chamber at the same angle used with the needle. Failure to do so may result in difficulty in inserting the implant, which may potentially widen the ostia and subsequently lead to overfiltration and loose fixation of the device to the sclera. The surgeon should also become familiarized with the injector device and specifically the central ridge, where one must press to release the device prior to inserting it. Placement of the surgeon’s finger anterior or posterior to the central ridge will result in greater effort required to release the device. Knowing the intricacies of the preloaded injector will help to promote a safer and uncomplicated insertion of the device. After the device is inserted, care is taken to make sure that it is well placed into the anterior chamber away from the corneal endothelium and iris and well situated on the scleral bed (face plate flush with the sclera). Furthermore, for the P version implants, the posterior groove on the footplate should point posteriorly toward the apex of the flap to promote posterior flow of aqueous.

As with traditional trabeculectomy, the scleral flap is then reapproxi-mated to sclera with 10- 0 nylon sutures. Two to 5 interrupted sutures are typically placed through the scleral flap. Flow can be assessed by injecting balanced salt solution through the previously created corneal paracentesis. After the amount of fluid flow is deemed appropriate and the eye pressure is adequate, the conjunctiva is closed with the surgeon’s suture and technique of choice (ie, single versus double, running versus interrupted).

Our postoperative care is similar to our standard post-trabeculectomy regimen of topical steroids and antibiotics. Furthermore, postsurgical modifications, such as laser suture lysis, are similar to standard trabeculectomy parameters. Anecdotally, however, we have found that with the utilization of the Ex-Press device, earlier and more aggressive suture lysis is possible without an increased rate of hypotony.

Retrieved from "https://www.keogt.com/w/index.php?title=Ex-Press_Glaucoma_Filtration_Device&oldid=950"
Category:
This page was last edited on 16 October 2019, at 16:52.
All text, tables, images and figures or any other content submitted to KEOGT become the exclusive property of KEOGT. The authors/submitter attests that they have all rights to submit the content and that the content is free for use by KEOGT without encumbrances (licensing fees, copyrights or trademarks) by other parties. By submitting content you hereby irrevocably assign and agree to assign to KEOGT, free and clear of any restrictions or encumbrances, all of your rights, title and interest in and to the content submitted.
Privacy policy
About Kahook's Essentials Of Glaucoma Therapy
Disclaimers